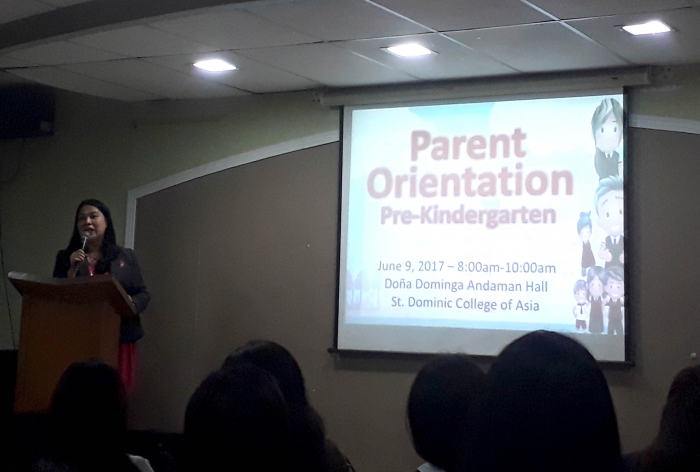 The Basic Education principal Ms. Ma. Arlene V. Coronado opened the event with a warm welcome for the parents wherein she discussed the changes to the education system brought by the K-12 program being applied this school year. She said that St. Dominic College of Asia is one of the competent school’s here in Cavite. The holistic foundation and quality education offerings.

Followed by the introduction of the faculty members of the Basic Education level then the orientation of the parents occurred afterwards. Ms. Sharmin Dianne M. Bulaklak, Preschool coordinator and Mr. Winterson  C. Ambion who were the ones who  discussed thoroughly the Dynamics, achievements, expectations, rules and regulations of the school for both levels.

The Basic Ed faculty and the other members of SDCA academic council attended the event.

The parent’s orientation for both levels ended with a closing remark by Basic Ed Principal with words of gratitude.

Read 3170 times
Published in What's New
More in this category: « SDCA Celebration of New Partnership with PTT Company along with the Annual Mangrove Planting SDCA-BED Joins Annual Freedom Rites »
back to top