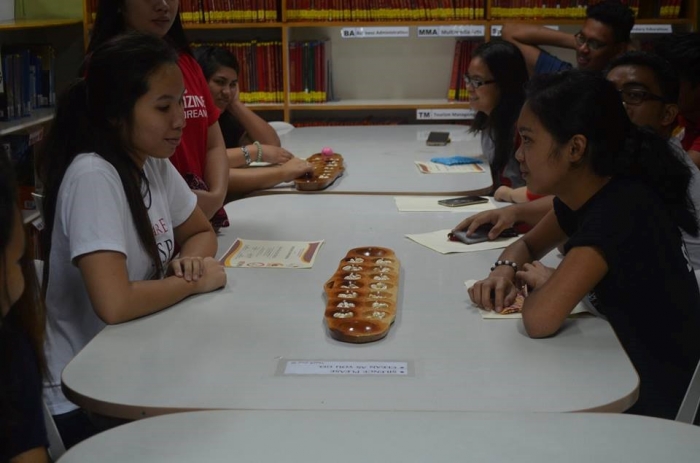 
Young Executives Society’s (YES) Francheska Fabro and Ryan Christopher Morada of YES was both declared as this year’s Chess champions. Fabro was successfully defended her title as the last year’s champion, while Morada regained his title after falling 2nd place last year. Following them on second place was Lileth Agustin of Red Concepts and James Baria of Association of Computer Talents (ACTS) Arbie Joy Talam of Association of Dominican Communicators (ADC) and CerDenea Ortega of LaboratoriumDuces (LD) was ranked 3rd in this Match


YES dominated again another indoor game which is the Sungka. Kathrina Toledo and John Lester Ricamara both reigned supreme in men and women’s division. While following them on second place were Nympha Mae Jimenez of ACTS and Sean Angelo Sugue of Pharmacy Collegiate Council (PCC). Lastly on the 3rd place was won by Jasmine Mandita of Global Educators’ Guild (GEG) and Christian Yabut (Junior Tourism Travelers Council)


The battle for the Championship of Darts even in Men’s Division was between Nico Borrinaga of Junior Philippine Institute of Accountants and Charles Uy (JPIA) of YES in which Borrinaga snatched the Championship leaving Uy in the second place spot. The third place spot was then taken by the Alliance of Future Hospitality Managers (AFHM) bet, Kenneth Estolano, The women’s division championship title was clinched by Fatima Joy Dessera if St. Dominic College if Asia Radiologic Technology Society (SDCARTS), followed by the2nd place, Angela Patricia Banila of Nursing Student Council and Arriane Austria of Red Concepts got the 3rd place.


It was lucky hand for REACH PT Society representative, Ardeson Resari as he was hailed as the champion in the men’s Division of Domino. Second on his rank was the PCC’s player, Benjamin Bumkeng and qualifying for the 3rd ranks is LD’s player, Albert Caudillo. While in the women’s division, the ACTS player, Justine Raboy sealed the match by winning the championship, beating Glenda Dauda of GEG who won second place and Psychology Society’s representative, Carmela Consul Finished 3rd.


JPIA retained their title in the Games of Generals as Daisee Ann Herrera and JherickBarce led the championship away from their opponent. The second placers were Justine Espiritu of ACTS and Aila Paladin of JTTC. Mary June Semilla of LD and Jersey Ann Go of PCC were upheld as the 3rd placers.


Scribblers from the REACH PT and AFHM outwitted the other academic organization representatives as they conquered the board during the scrabble event. Jasmin Lobrio won the championship in the women’s division against JPIA’s Nympha Mae Binasaoy who fell on the 2nd place, while Rubielyn Mae Acosta of the GEG landed on the 3rd place. Earl Jan Sabido conquered the men’s division and successfully held the championship title where John Richard Suzara of YES landed on second place and PCC’s WynzeMallabo was placed on the 3rd spot.


Paddlers from LaboratoriumDuces (Men’s Division) and Association of Computer Talents and Specialists (Women’s Division) reigned as champion in the Table Tennis match.

In Men’s Division, it was a back-to-back victory for Aaron Policarpio from Laboratorium Dices against the 2nd place, Jan Michael Canave of REACH PT and Red Concepts’ Christian Mendoza who was hailed as the 3rd place.

The outpower performance by Angel Manalo from the Association of Computer Talents and Specialists in the women’s division dominated the championship title. While, the 2nd place was taken by Rengian Cantillas of the Global Educators’ Guild, and Louise Navarro of Psychology Society who captured the 3rd spot. The game was facilitated by Ms. Alexandra Pamela A. Panis, Alumni Officer.
Read 982 times
Published in What's New
More in this category: « Education captures the Championship Acad Orgs Battle in SDCAlympics »
back to top