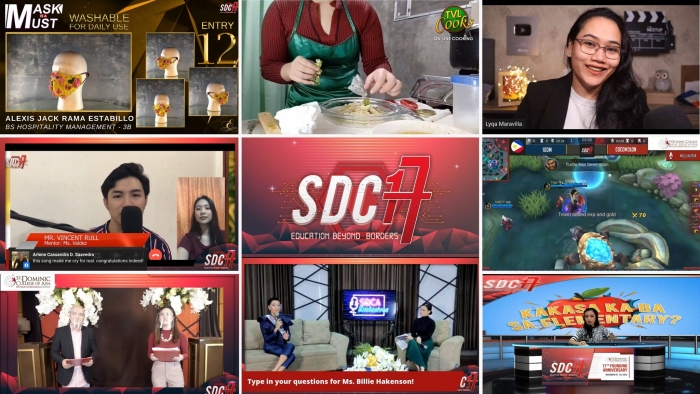 Despite the challenges brought by this pandemic, St. Dominic College of Asia successfully celebrated its 17th Founding Anniversary, with the theme, "Education Beyond Borders" from November 26 - 28, 2020, spearheaded by Ms. Mary Grace G. Demetillo, the Director for Student Affairs and Services, with the collaborative efforts from Basic Education to Higher Education and the Department of Administrative Support Services department.

During the week-long anniversary celebration, series of activities and events, both academic and non-academic programs, were held virtually for the whole Dominican community. Pre-events happened from November 23 to 25 and the opening ceremony occurred on November 26. During the opening, SDCA featured the highlights of the pre-event celebration activities that students could still watch out for. They also launched their founding anniversary AVP that tells the story of the institution’s perseverance and continuous efforts in providing quality and revolutionized education to its students amid pandemic.


Anticipated events including the Dominican Sing Season 3, Lakan and Lakambini, Ramp to Fame, and the Dominican All-Star were also held. The Dominican All Star, which served as the culminating event of the celebration, and a benefit event for the affected families of Typhoon Ulysses. As a result of the collaborative effort of everyone, SDCA was able to collect a total of PhP 19, 214.30 cash donations from the viewers through GCASH.


Another most-awaited competition was the first ever "Mask is a Must: Face Mask Couture Competition and Exhibition 2020" organized by the SIHTM Eventologist Batch 13[MST1] students and created wearable and avant-garde mask designs that can be used in special events. All entries were displayed and opened for public viewing at One Asia Heritage started November 26 to 28.


The SDCA 17th Founding Anniversary was also an opportunity for our future journalists to showcase their skills in campus journalism despite the postponement of the schools' press conferences because of the pandemic. This was made possible through “Beyond the JOURney”, an event organized by the Dominican Vanguard, the official student publication of SDCA - Senior High School, where students from various schools competed held 27 November via Zoom. Among schools that joined the online competition, six of them bagged places in both English and Filipino categories.


Educational Content Creator, Ms. Lyqa Maravilla a.k.a “Team Lyqa” and Ms. Universe Philippines 2020 - 4th Runner Up, Ms. Kimberly “Billie” Hakenson, also joined the celebration. On the E-Talk Show event facilitated by the Education Department, Ms. Lyqa gave pointers on good study habits during online classes. She also shared some inspirational messages with the students. Meanwhile, Ms. Hakenson appeared in the SDCA Exclusives where she was interviewed live at the SDCA Campus, D.R.A. Hall. During the interview, Ms. Hakenson shared her most memorable experiences in SDCA while she was still finishing her degree in BS Business Management. She also gave a glimpse of her journey in joining beauty pageants and graciously answered questions from live audiences.


This academic year is a truly challenging one, but SDCA will not stop innovating strategies to provide quality education while ensuring students’ holistic development amid the pandemic.

Read 3289 times
Published in What's New
More in this category: « Featured Films split awards in annual Quincine SDCA RECEIVES THE TOP 3 SPOT OF COLLEGE WITH THE HIGHEST ACCREDITED PROGRAMS IN THE PHILIPPINES »
back to top