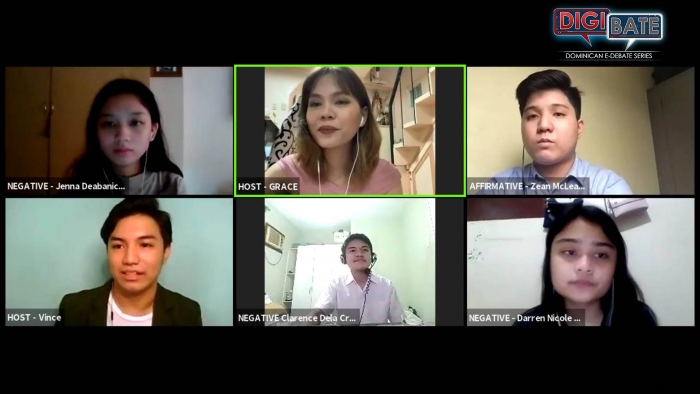 It is proven that Dominicans are unstoppable—despite the power outages in most parts of Bacoor City, the DigiBate 2020 still aired live last November 27 via Facebook live.


Participants were put on hot seats with questions that triggered the most relevant issues in the Philippines today, politics, education, and well-being.


On the affirmative side were December Lily Tejano, Ethan Gabriel Alegro and Zean Mclean Dinoy while Darren Nicole Arriola, Clarence Kyle Dela Cruz and Jena Deabanico were on the negative side.


In the early rounds of debate, Dinoy of the affirmative side, tenaciously stated his stance that agrees with allowing individuals 15 to 65 years old to go outside amidst the pandemic.


In contradiction, Dela Cruz from the negative side said that it is the duty of the government to provide the needs of people who are at risk.


“Even before, mayroong mga ginagawang pagtulong ‘yong gobyerno such as providing money to people who are in need and even to those who are not in need”, Dela Cruz argued.


On another round of debate, Ethan Gabriel Alegro of the affirmative side, strongly reasoned that it is just too complicated to continue the 2022 elections.


“It is really logical to postpone the elections especially on the chaos we are in right now”, Alegro said after raising Article 7 Section 4 of the law.


On the other hand, Jenna Deabanico of the negative side, countered-attack Alegro’s statements saying that 2022 is still a couple of years ahead and the government still has time to prepare.


Moreover, Dominicans showed their support as they laid off their perspectives by keying-in their comments during the live broadcast.


Lastly, the negative side was proclaimed the winner of the DigiBate 2020 along with Clarence Kyle Dela Cruz who was announced the Best Speaker attaining the highest point in the debate.