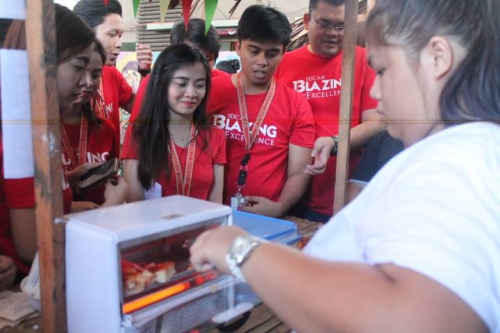 A musical entrance from Ligas Two Elementary School Drum and Lyre Band started the festival. The ribbon-cutting ceremony was led by Dr. Marita Andaman-Rillo, chairman of the board of trustees and Dr. Gregorio A. Andaman Jr., SDCA president together with his wife, Dr. Pinky Andaman. Also present in the event were Ms. Ma. Arlene V. Coronado, basic education principal, Mr. Jonathan Velustria Sta. Ana, student affairs and services director and other faculty members and administrators from different departments.

The School of International Hospitality and Tourism Management (SIHTM) made the festival possible by preparing products made from the edible mushroom Pleurotus ostreatus. Products such as pizzas, churros, ice cream, burgers and steaks were made by the students.

Pleutrotus ostreatus or oyster mushroom was propagated by the citizens of Maragondon, Cavite, and at SDCA’s mushroom farm.

The said festival was also part of the community breakfast for Dominicans.

(This article was featured in the Gateway Group of Publications broadsheet, second semester, A.Y. 2016 - 2017)