SDCA Receives a Plaque of Recognition from the Maragondonians 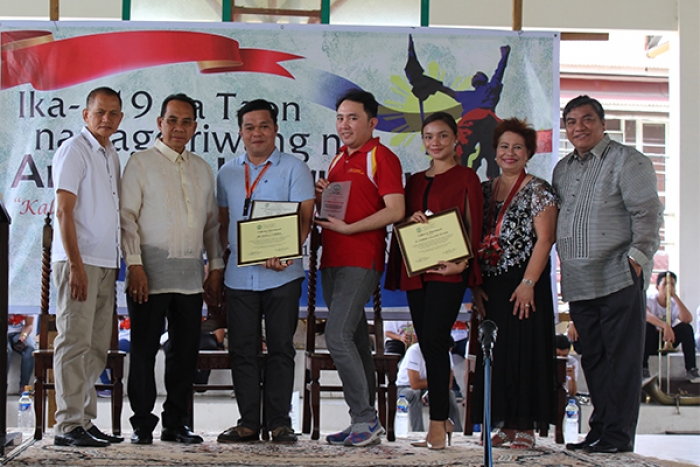 St. Dominic College of Asia received a Plaque of Recognition from the Municipality of Maragondon, last June 12.

Alongside with the Municipality’s celebration of their “Ika-119 na Taon ng Pagdiriwang ng Kalayaan” with its theme, “Kalayaan 2017: PagbabagongSama-samangBalikatin,” SDCA was given a plaque of recognition as an act of appreciation for its excellence in supporting the Maragondonians through charities, educational, medical and social service programs to ensure the welfare of the people of Maragondon.

The Vice Mayor of Maragondon, Cavite, Mr. Ireneo C. Angeles, began the ceremony by giving his opening remarks. It was then followed by a message from their Mayor, himself, Mr. Reynaldo A. Rillo. In his speech, Mayor Rillo also introduced their guest of honor, the Chairman of St. Dominic College Asia, Dr. Marita A. Rillo and honor all her contributions for the development of her home town, Maragondon.

Dr. Marita A. Rillo also gave a speech which was mainly focused on her respect towards the Municipality of Maragondon, Cavite and its people, she also took this opportunity to commemorate our Independence Day and show her concern about the occurrences in our country.After that, they proceeded withthe highlight of the celebration which was the awarding of the Plaque of Recognition that serves as an act of appreciation for its deserving recipients to acknowledge their excellence in supporting the Maragondonians through charities, educational, medical and social service programs to ensure the welfare of the people of Maragondon. Prof. Ronald C, Tomines, the Community Outreach and Extension Officer was the one who accepted the award in behalf of St. Dominic College of Asia.

The occasion was attended by our very own, Prof. Christian Tu, the Program Chair for the Bachelor of Science in Nursing and Ms. Ianne Kristine Lopez.

After a brief intermission number from Ms, Christine Joy Pareja, the Chairman of SB Committee on Tourism concluded the convocation with his closing remarks.

Read 5167 times
Published in What's New
back to top